Jahorina is the best of all worlds: a balanced mix of blue, red and black runs featuring everything from a newly-built, dedicated beginners area, up to slopes that were used during the women’s events at the 1984 Winter Olympics.

In 1984, Sarajevo played host to the world during the Winter Olympics. 38 years later, it remains an excellent destination for winter sport. 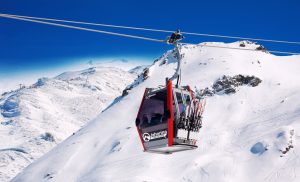 Stretching to 1,916 metres above sea level, the main Olympic mountain of Jahorina is normally covered in between of one and three metres of snow during the Winter (December to end of March). With 47 kilometres of trails and eight ski lifts (comprising a NEW gondola lift, three modern six-seater fast lifts, one two-seater lift and 3 button or anchor lifts), this mountain can host around 17,000 skiers per hour.

In spite of these excellent facilities and ski fields, Jahorina remains a relatively undiscovered gem of Europe. Avoiding the congestion and high prices of the Alps of Western Europe, Sarajevo’s wintersports scene is a haven for in-the-know skiers and snowboarders looking for the best value on the continent!

With equipment hire for only €15 per day and food and drinks payable in the local “Bosnian Marks,” you pay only a fraction of what you would in Austria, Switzerland or France. As an example, a large beer in many French ski resorts is around 9 Euros, whereas in Bosnian ski resorts it is only around 3 Euros!!!

New to skiing or snowboarding or feel that you are a lower intermediate skier? Then this is the perfect resort for you – why pay for expensive lift-passes in French or Austrian resorts when you are only able to use a few of the slopes when you can come to Bosnia and take advantage of low ski-lift passes and ski many more of the pistes!

There are slopes for every skill level from the most intense adrenaline junkies to those looking for a gentler ride. We also offer ski and snowboard lessons from as little as €15 an hour per person for group lessons or €30 an hour for individual 1-to-1 sessions.

Every year, we are asked about the apres-ski on Jahorina and we always try to be honest: it is reasonable but getting better every year!

One of the best places to start the night while having a few drinks with friends and catch up on the day’s on-piste thrills is Termag’s main hotel bar called “Kamin Sala”. Tasteful decor, a good range of drinks and a chilled out vibe – you might not leave the whole evening if the conversation keeps flowing!

Below Termag is another bar/restaurant called Koliba, which boasts an open fire, great views and live music several nights a week. The food on offer includes excellent pizzas and local Bosnia fare such as cevapi, corba (stew) and slow-cooked meats.

Another bar where things can get lively is the Hotel Lavina bar. With live music 3 or 4 nights a week, a mixture of locals and tourists alike tend to frequent this venue – well worth checking out.

There are 5 or 6 other bars dotted around the resort, and in the alpine village of Sator.

Finally, the resort has been pro-active in hosting special events, such as an off-shoot of Serbia’s legendary EXIT festival, and opening night concerts featuring the likes of international big hitters like Bryan Ferry, or local legends such as Haris Dzinovic.